As a child, one of my favorite poems was “Jill Came from the Fair” by Eleanor Farjeon, which was in my copy of The Big Golden Book of Poetry: 85 Childhood Favorites. I loved the rhythm of the poem and the two-page-spread illustration that accompanied it.

My day-trip excursions sometimes remind me of that poem; although I don’t usually fit in quite as much as Jill does, I fit it in as much as I can, as I did on a recent day trip to Bologna.

My first moments in Bologna reinforced my sympathy for the tourists who complain about the lack of public bathrooms in Florence. One advantage to arriving anywhere by train is the availability of bathrooms in the station, but the same-day train ticket price was prohibitive, so I drove. There was no bathroom in the tourist information center, which I thought odd, but a staff member suggested getting a coffee in the bar next door (a technique often used to access a bathroom) or paying to use the bathroom in the library nearby. I don’t mind paying—it’s worth 50 cents or a euro for a clean bathroom—but it wasn’t clear that only one bathroom in the building was accessible to non-library-card holders. However, after finally finding the bathroom, I was more in the frame of mind to appreciate the main hall of the library.

My primary objective for visiting Bologna was to see the meridian line in the Basilica di San Petronio and witness the sun crossing the line around noon (due to summer time, it’s actually a few minutes after 1:00 p.m.) or, to put it more accurately, the earth turning so that the sun falls on the meridian line. The line was constructed by Gian Domenico Cassini in 1655 and is 67 meters long. In combination with the hole through which the sun’s light passes, it’s a very large sundial! It was fascinating to see another example of church as solar observatory (Santa Maria del Fiore in Florence is another). 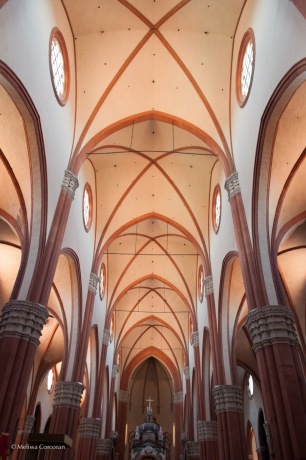 The nave of the Basilica di San Petronio.

The opening through which the sunlight comes.

The start of the meridian line.

The disk of the sun on the meridian line.

After exploring the rest of the church, it was time for lunch. I chose a restaurant at random and had a specialty of Bologna, tagliatelle al ragù. It was served in a ‘bowl’ of parmesan cheese and was delicious. I followed that with one of the best chocolate cakes I’ve ever eaten, and followed that with a vow to make an overnight visit so I could fit in more meals. In a country know for its wonderful food, it says something that numerous articles state that Bologna is known for its cuisine.

I still had some time before the designated time on my ticket to climb the Torre degli Asinelli, so I decided to look for a nearby geocache; it was especially appealing because I could have gotten a FTF (first to find). I didn’t find the cache, but I did find an interesting story. The cache was at Le Tombe dei Glossatori: the mausoleums of the glossators. In the Middle Ages, glossators wrote commentaries on Roman law to aid in understanding it. According to the cache owner, they were named after glosses—side or margin notes in law books. (Thanks to cache owners like these, one learns a lot as a geocacher!)

After my unsuccessful search, I headed to the tower, prepared to climb 498 steps. The young woman ahead of me bounded up the steps but my pace was a little slower. I tell myself that I am carrying my camera and two lenses, so that accounts for my pace! The views at the top were worth the climb. 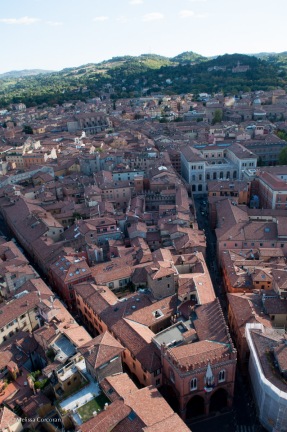 View of a wedge-shaped street.

View from an opening partway up the tower. 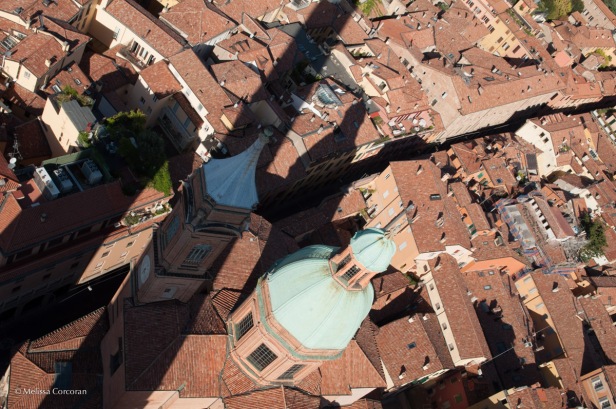 As I waited to start my climb down, a man was coming up the final flight of stairs. The treads were so narrow and the pitch so steep, that I went down backwards, as if I was on a ladder. He, on the other hand, was wearing flip-flops, which have got to be one of the most impractical types of footwear for walking cobblestone streets and climbing towers like this one.

Back on the ground, I took pictures of the tower I had just climbed and the Torre Garisenda; together, they marked an entry point to the city in the 12thcentury. My sister and I have a running conversation about how neither of us can shoot a straight horizontal or vertical line, but in this case, the Tower Garisenda (on the left in the photo) really is leaning! 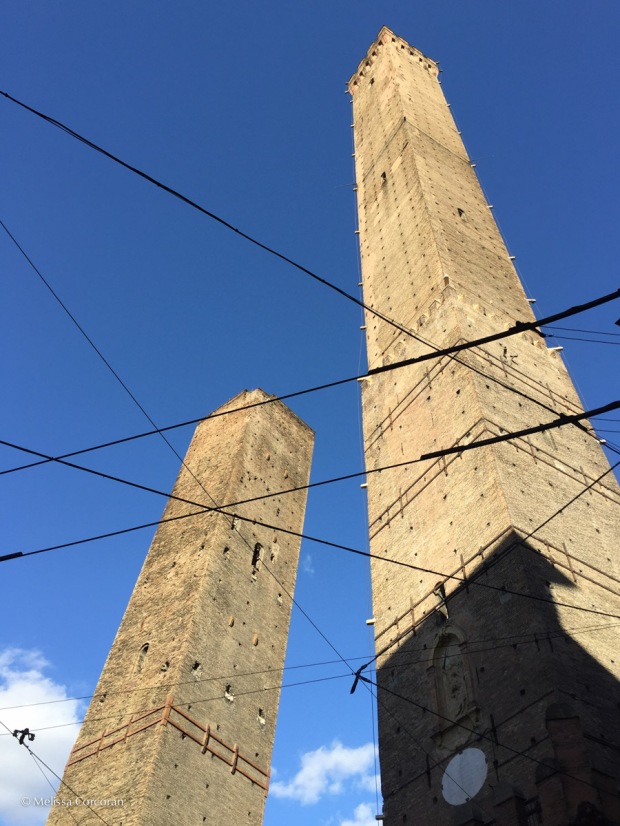 I finished my day by visiting a great yarn store and buying yarn for my next crochet project. And so I came back from Bologna.