When my friend Jeff married Elka several years ago, I lucked out because while at first she was ‘Jeff’s wife,’ over the years she became ‘my friend Elka.’ I remember saying to Jeff one night, as he drove me to my train after a visit, that I liked Elka more and more every time I saw her.

About three years ago, Elka was diagnosed with cancer. Over the long months of treatment, I was rarely geographically near, but I tried to be there for her long-distance. I read every CaringBridge post and commented regularly so she and Jeff would know I was thinking of them. I emailed, made a couple of visits when I was in town and her health allowed it, and I sent beautiful pictures because she said they made her happy. After one particularly brutal chemo session, she asked me to send her more photos, so I put together a slideshow titled ‘Beauty for Elka.’ It was one of the last times I would send her photos (and receive one of her enthusiastic thank-yous), as she died within weeks.

A couple of months ago, I was telling a friend how much I missed Elka. I said, ‘I’m not trying to pretend we were best friends, but . . .’  My friend finished the sentence for me, ‘she was a positive and beautiful presence in your life.’

Exactly. And somehow, sharing the ‘Beauty for Elka’ slideshow is a way to memorialize her on this first anniversary of her death. 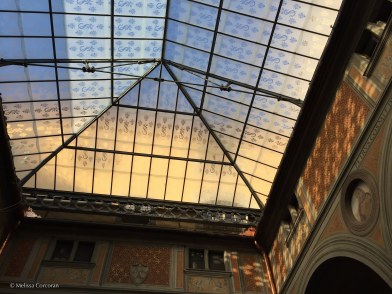 In the cloister of Basilica della Santissima Annunziata.

Also in the cloister. The dolphin looks like it has an attitude!

A view from my window one morning.

The Frescobaldi vineyards on the way to Porciano.

The foyer of a building in Pistoia. I didn’t realize it was a bank and that I wasn’t supposed to be taking pictures! (Elka commented on this in her thank-you email, saying, “Can’t find that in a TD or Citizens bank, that is for sure!”)

Seriously, bikes and cars should be parked where they coordinate with their surroundings, as this one in Pistoia does.

Poppi (in the Casentino Valley) pretending to be an island. 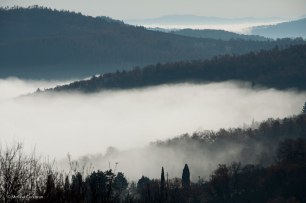 Near Fiesole, on my way back from Porciano one day. Drivers were slowing down to take pictures or pulling over, as I did.

Loggia in Piazza di Ciompi, which was built for the fisherman relocated from the Ponte Vecchio when the Medici built the Vasari corridor. The anatomy of these sea creatures is suspect, if you ask me.

The Christmas decorations stayed up until the Feast of the Epiphany.

The start of the Procession of the Magi on the Feast of the Epiphany, with the Palazzo Pitti in the background. It was the most spectacular parade I’ve seen yet here.

A group waiting in the Piazza della Signoria to join the procession.

The view on a clear night from my terrace.

2 thoughts on “Beauty for Elka”