I’m waking up from a dream, one filled with glowing color and intricate patterns. The dream is called Ravenna and the colors and patterns are those of the Byzantine mosaics.

With several early Christian monuments on the Unesco World Heritage list, I had expected the mosaics of Ravenna to be wonderful, but I was astounded by how beautiful they are. My first visit was to the Basilica di San Vitale and I found myself sinking, if one can use that word when looking up, into the intricacies of the mosaics that cover the apse and presbytery. I tried to note every detail, not just of the scenes depicted, but also of the decorative elements, but it was impossible – there was too much to absorb all at once. Thanks to an app I downloaded before my visit, I took a moment to look down at the floor of the presbytery for a maze traced out in stone. Following the arrows leads one to the center of the basilica.

That first visit whetted my appetite for the four monuments I would see the next day. All of the mosaics were beautiful but at each monument, there were one or two elements that stood out to me. At the Basilica di Sant’Apollinare Nuovo, it was the glimpse of shimmering gold I saw from the doorway before entering the church. I gasped loudly and I guess the man punching tickets was used to that reaction because he didn’t check to see if I was okay! Again, I looked at as many details as I could, but the magnificent procession of figures on each side of the nave was the highlight. These long panels are topped by individual figures, probably prophets, set between the windows. On the uppermost level, scenes from the Bible are illustrated in mosaic.

At my next stop, the Battistero Neoniano, it was the mosaic embellishments around the edge of the embrasures that had me taking pictures, including squeezing behind the construction scaffolding in front of one embrasure to get a photo. It was interesting that the embellishments were symmetrical but not identical. In the atrium of the lovely Cappella di San Andrea, I looked for the duckling with one red foot and one black foot, the only bird in the pattern of birds and flowers with this distinction. My jaw dropped (actually, that happened a lot) when I walked into the Mausoleo di Galla Placidia. The plain exterior of this building is in contrast to the magnificence of the mosaics inside, including the representation of the night sky in the dome. The mausoleum is small and the dim light makes the mosaics glow, rather than sparkle, to lovely effect.

Detail from Cappella di San Andrea showing duckling with one red foot and one black foot (scan of postcard).

I thought that after all this magnificence, I would be too visually exhausted to look at anything more, but my last day found me walking through the Saturday markets in the piazzas and loggias around the city center. I stumbled across the Battistero degli Ariani, another monument on the Unesco list, when I was trying to figure out what a gentleman with whom I spoke was telling me about a nearby church. The dome of this baptistery had a similar theme to the dome of the Battistero Neoniano – the baptism of Christ and a procession of the Apostles.

I visited Dante’s tomb because I didn’t think I could go back to Florence without having done so. I went into the Basilica di San Francesco to see the flooded crypt; there are mosaics on the floor and goldfish in the water! I visited Museo TAMO (Tutta l’Avventura del Mosaico) which was so-so – I had hoped to see more about how mosaics are made – but I loved the faded glory of the church, San Nicolò, in which it is housed. On my way back to where I was parked, I had a Carl Gustav Jung moment when I couldn’t find the piadina sandwich board I had seen earlier when on that same street. (When Carl Gustav Jung visited the Battistero Neoniano, he saw a mosaic in which Christ is holding out a hand to Peter, who is about to drown. The mosaic does not exist.)

I ended my time in Ravenna with a visit to Basilica di Sant’Apollinare in Classe, another of the monuments on the Unesco list. While the mosaics aren’t as immediately stunning as those in some of the other monuments, they are worth seeing, as is the light and airy church. 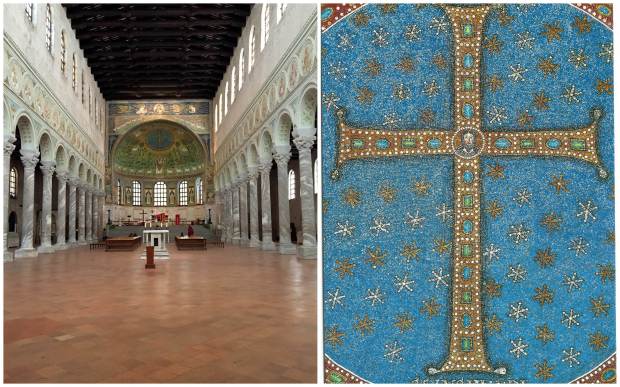 Basilica di Sant’Apollinare in Classe. Left: the nave. Right: detail from the apse (scan of postcard).

I hope I have this dream again!

Images © Melissa Corcoran, with the exception of scans of postcards.