In my travels, I have visited homes of the aristocracy, including a palace or two. There’s always been something to admire about each of them and a couple of times, I’ve been awestruck. It wasn’t until today, however, that I felt a personal connection with one of these homes. I visited Miramare Castle (near Trieste, Italy), built by the Archduke Ferdinand Maximilian of Hapsburg as a residence for him and his wife. What struck me most about the Archduke was that he loved the sea and his favorite activity, according to the audio guide, was reading.  A man after my own heart! 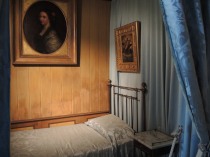 The Archduke was in the Austrian Navy and many of the elements of his rooms reflect that. This room was paneled in wood and the ceiling lowered to mimic a cabin on a ship. The bed was brass like that on a ship, but I’m not sure a portrait would have been standard furnishings! 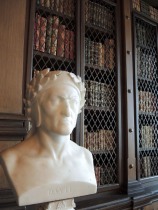 In the library, Maximilian wanted to celebrate the literary genius of four diverse cultures:  Greek, Italian, Anglo-Saxon and German. These are represented by busts of Dante, Goethe, Shakespeare (spelled Shakspeare on the bust), and Homer.

It was the view from the terrace that made me understand why Maximilian had chosen this rocky outcrop for his home.

Before I left the castle grounds, I walked out on a stone jetty, where boats would have pulled up to discharge guests arriving by water. The wind was blowing, the waves were crashing against the jetty and I could look far out into the Adriatic.  It was wonderful, as was this view of the castle. 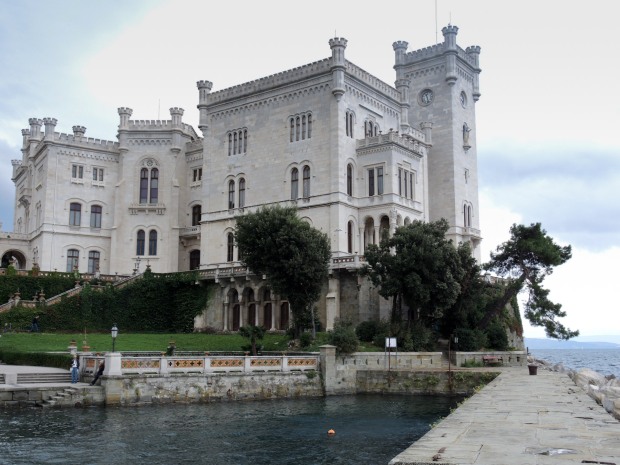